With the recent ruling on the constitutionality of the Affordable Care Act, the U.S. healthcare system could change dramatically. The landmark bill that characterized the Obama Administration has suffered a serious blow, unless an appeal of the ruling is successful. California’s attorney general described the decision as “an assault on 133 million Americans with pre-existing conditions [and] on the 20 million Americans who rely on the A.C.A.’s consumer protections for health care” while the attorney general of Texas praised it by saying “Americans will again have greater choice about what health coverage they need and who will be their doctor”. But whether or not you agree with the ruling, it is worth considering what comes next for healthcare in the United States?

There have been several analyses that have tried to put a price tag on universal healthcare, or as Sanders calls it, “Medicare-for-All.” Sanders estimates that his new program would cost $1.3 trillion a year. But compared to other analyses, this estimate seems very low. Emory University estimates a price of $2.4 trillion a year while the Urban Institute guess is $2.5 trillion. The Committee for a Responsible Federal Budget pegs it at $2.8 trillion.

Factoring in tax expenditures, the federal government spent about $1.3 trillion on healthcare in 2018. If Sanders’s estimates really are correct, then expanding healthcare coverage to all U.S. citizens would not cost the federal government any more than they currently spend. But “Medicare-for-All” may include less costs than universal healthcare. According to Medicare.com, there are healthcare services and costs that Medicare does not cover, like routine dental care, vision exams, and prescription drugs. Including these costs, among others, could raise the cost of universal healthcare above the $1.3 trillion estimate. The Mercatus Center also did a study on “Medicare-for-All” and concluded that the plan would cost at least $32.6 trillion over the first 10 years of full implementation. But their model assumed “significant administrative and drug cost savings under the plan, and also assume that healthcare providers operating under M4A will be reimbursed at rates more than 40 percent lower than those currently paid by private health insurance.” The table below shows yearly projected federal government expenditures under this plan:

Obviously this plan will not be cheap. Based on available analyses, I find the $1.3 trillion estimate by Bernie Sanders to be a very partisan analysis not interested in understanding the true burden the federal government would take on. 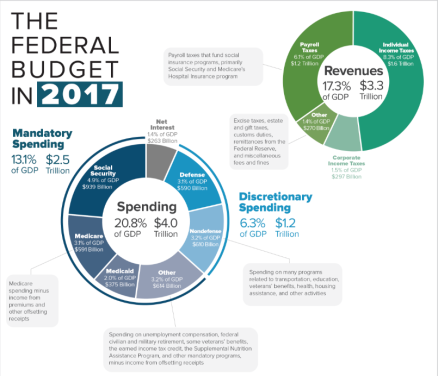 Increasing taxes would take money from the healthy and give it to the sick. 85% of healthcare costs can be attributed to chronic diseases like diabetes and heart disease. It would be unfair to force healthy individuals to pay for treatments for these diseases. It would also introduce a new level of moral hazard into the healthcare market. Although citizens would be able to obtain healthcare for “free”, this would incentivize riskier behavior. People could depend more on their healthcare providers to keep them healthy rather than taking care of themselves, increasing costs yet again. Raising taxes could also affect the greater economy as a whole. Less money in the pockets of Americans means less consumption and investing, leading to less economic growth.

Increased deficit spending would be bad as well. The U.S. national debt currently stands at $21.8 trillion, with net interest on debt totaling $334 billion. Any substantial increase from deficit spending to the national debt would continue to balloon a huge problem that no official in Washington seems to want to take on. If we continue to introduce new costly programs without the revenues to sustain them, the interest on debt will start to be a problem. It currently stands as the 5th largest expenditure on the U.S. budget.

With “free” healthcare comes increased waiting times to see the doctor. The chart below shows a comparison of wait times between the U.S. and Canada, a country with universal healthcare.

With an average wait time 3 times longer across specialties, Canada has much longer wait times than the U.S. Another report showed that the median wait time for medically necessary treatment was 19.8 weeks. Many politicians point to Canada as an example of how America’s healthcare system should function. This is one aspect of the system that they must be overlooking.

Other countries with universal healthcare systems experience similar wait times. Below is a chart that shows the percentage of patients that experience a wait time of 4 or more weeks:

The percentage of individuals that wait 4 or more weeks for healthcare services in the U.S. is far lower than comparable countries at 4.9%. Clearly, “free” healthcare comes at a cost.

Government is well known for its wasteful spending and doing things inefficiently. When the government is involved in picking winners and losers, efficiency that the free market provides is lost to whatever default the government sets. Introducing such high levels of regulation into the U.S. healthcare system will decrease innovation and efficiency gains because healthcare providers will have a steady paycheck from the government no matter what they do. Global medical innovation primarily occurs in the United States. Losing free market innovation for the sake of comfort is not worth it.

With universal healthcare, the government would be in charge of most, if not all, medical decisions. Medical solutions that may seem riskier at the time would be overlooked because the government would not want to assume responsibility. To cut costs, the government may not approve certain procedures that could normally be bought in a system like the U.S. has now, forcing customers to pay double. Higher taxes could also lead to less innovation and investment in the healthcare industry. If the government wants to increase people’s access to healthcare services, why not just provide money to be spent however consumers please?

Universal healthcare, or “Medicare-for-All”, would cost trillions of dollars raising taxes and increasing yearly budget deficits. It would also increase wait times experienced by patients looking for medical help while decreasing medical innovation in the United States. It would leave the government in charge of the nation’s healthcare decisions and force healthy people to pay for unhealthy individuals.

I believe that universal healthcare is not the solution that should be tried in the United States to fix the problems we experience here. Rather than increasing government intervention in the market, I think the best solution would be to free up the markets and allow people to cover their own healthcare costs. This would keep taxes lower and give people the incentive to be as healthy as possible because they are responsible for their own healthcare costs. Medicare-for-All gives all the wrong incentives to people and should not be implemented in the U.S.

If you like our work and want to support us, you can do so by sending cryptocurrency to the following wallets: